Fierce passion or long-cherished dreams…she can’t hang onto both.

She hates average…he’s as average as they come.

High school history teacher Doug Garvey is trying to enjoy his last few weeks of summer vacation, but receiving his final divorce decree hits him harder than expected. After a brief fling fizzles, he fears love just isn’t in the cards for him. If only he could find someone who’s real, someone interested in something beyond herself…maybe a new running partner who can keep up with his more carnal appetite. When sexy, straight-talking Laurel runs across his path, he dares to hope again.

He’s done with social-climbing posers…she’s ambitious and has big dreams.

Fired from an art gallery, Laurel Jepsen shelves her pursuit of an art career in San Francisco to help her beloved great aunt Maxie move into assisted living. While out on a morning run, she’s harassed by a group of teens until a tall, broad-shouldered hottie steps in, pretending to be her boyfriend with a kiss that makes her wish it were true. But she’s only passing through, not looking for a relationship.

Their fierce chemistry burns up the sheets—and the couch, the shower, the forest—but falling in love would ruin everything. Laurel can’t stay in Eugene, and he can’t leave. Doug’s only hope is to convince her the glittery life she’s after could blind her to the opportunities already in her path. 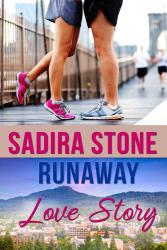 END_OF_DOCUMENT_TOKEN_TO_BE_REPLACED

Store Hours King's Books is closed to the public, but open daily 11 am - 7 pm.
Orders can be placed online or via email. We offer curbside pickup and also shipping.